Recently a bookseller, Nahul Meera, also known as Nagore Meera, passed away in . Nagore, a town in Tamil Nadu, India, located approximately 4 km north of Nagapattinam, is famous for a prominent Muslim shrine (dargah), one of India’s most important, dedicated to the 16th century saint Syed Shahul Hameed. During the annual 14-day feast (urs or kanduri) this shrine attracts hundreds of thousands of visitors, Hindus and Muslims, from within and elsewhere.

Syed Shahul Hameed has many devoted followers in , among these Meera’s family and those of other Tamil Muslim (Mamak) traders and businessmen. At the corner of and stands a modest but appealing mosque-like structure, a memorial in honour of the saint of Nagore. Replicating the design of the original shrine complex in Nagore, this memorial is maintained by the local Mamak community.

Meera will be remembered as perhaps the most well-informed or “learned” of Penang’s secondhand book dealers, one of the dozen or so, whose derelict stalls once lined just outside a heritage building, the old , which in recent years was used by several non-governmental organizations. He was often consulted as a resource person familiar, in particular, with the history of ’s Tamil community, Muslims and, to some extent, Hindus. Thus, in some ways, he contributed to the recording of the State’s oral history. As a young man, before becoming a dealer in secondhand books, Meera worked as a salesman in a toy shop in ; it was during those days, in 1967, that I first met him.

The booksellers of , most of them Mamaks, and two belonging to the Chinese community, were shifted by the City authorities, under protest, after several suggested alternative venues were rejected by them, to the far end of the first floor of Chowrasta Market on . Most of them have passed away. The places of several have been assumed by their sons, and in one case, at least, there is already a grandson being trained to inherit the business.

But the institution of secondhand book buying and selling, possibly started in Penang in the nineteen forties along , now buried under the massive Kompleks Tun Abdul Razak (KOMTAR) structure, has changed considerably with the shifting face of itself. Today there are other lesser-known stalls here and there in the city, as well as a handful of shops on Chulia Street--book exchanges rather than secondhand bookshops--catering mainly for budget tourists; but these have not reached the kind of fame or status attained by Macalister Road’s Mamak stalls.

While the benefits to those who wished, for whatever reason, to get rid of their used books, often as mere scrap paper, were quite obvious, they were infinitely greater for the countless regular visitors to those stalls, casual buyers, collectors as well as dealers from far and near, including one unusual buyer—a westerner who ran a secondhand bookshop in Thailand. The range of materials available was amazingly wide. A lucky visitor could occasionally, in the often messy “system” of these secondhand booksellers, pick up, on a timely visit, something rarely seen and long sought after, worth substantially more than what the bookseller asked for it. Some, like me, have, through consistent and dogged search for books and other printed materials of all descriptions, documents, even stamps and records in these Mamak stalls as well as elsewhere within and outside the country, built up sizeable, varied and invaluable collections.

The other side of the story, from the perspective of the stall-keepers themselves, was also interesting in its own way; and it was not always entirely about making money. Meera, himself an avid reader, was, in fact, notorious for charging a pittance for whatever item he sold, particularly to someone like me. I had become more than a regular customer through our mutual involvement in many an activity in , not, in every instance, connected with books. In his final weeks I was one of two researchers who had, in fact, interviewed him separately for information, which will find an eventual place in forthcoming books.

It is impossible, to be sure, to acknowledge the material benefits derived by these Mamak booksellers, who, while based on , continued to maintain close ties with their families in Tamil Nadu, . In the typical old world style of business, introduced into this country during prewar years by South Asians of virtually every description, and undoubtedly also by the Chinese, several of these Mamak booksellers made substantial fortunes from their trade, characteristically living frugally in Penang so that money could be sent off on a regular basis to their families in Tamil Nadu. One hears of estates acquired and mansions built in their native towns or villages. Seldom, in those days, did these traders bring their wives or children to . In certain cases a son eventually joined the father, or a nephew his uncle in the expectation of living on in this country on a permanent basis.

But there are also other, less obvious, dimensions to this whole matter. Not in all instances did the Mamak booksellers return to to benefit from their own hard-earned money.

There was the case of a pair of elderly brothers who specialized in Mills and Boon romances, selling these and other such novels, new or used, or renting them out for a small fee to female readers of almost every age.Their families lived well in Nagore, in the shadow, literally, of the famous shrine (dargah). When questioned as to why they preferred to be in Penang, standing or sitting on stools more than twelve hours each day at their not particularly hospitable bookstall rather than passing their twilight years in their native land, the younger of the two brothers, Abdul Lathif Maraikar, who managed the business, replied that he would not be able to live without anything to do. He had to keep himself busy. I perceived an important truth behind this almost philosophical answer, a truth well-known to many: boredom can kill, literally. But could he not keep himself occupied in other ways in the ease of his reportedly luxurious home in ? No. He knew no other way to keep himself busy, so great was his addiction to bookselling. Abdul Lathif Maraikar eventually passed away in . I never found out what happened to his sibling.

Then there is the even more interesting story of Zakaria, the best-known and possibly wealthiest of the secondhand booksellers of who owned substantial landed property in Tamil Nadu. Nahul Meera, who visited him during one of Zakaria’s home visits to his family, gave some interesting details. Travelling by bus, Meera was given instructions as to how Zakaria’s house could be reached. He was to get off the bus at a particular landmark, seemingly in the middle of nowhere, a gate manned by security guards. Reaching that point Meera made inquiries. He was told to wait, and, within a few minutes, a car arrived to pick him up. Meera discovered, to his amazement, that the gate, in fact, marked the entrance to Zakaria’s property; this consisted of acres upon acres of coconut palms. Meera was impressed by the number of workers employed by Zakaria and the wealth that was clearly generated by his land. This was a startlingly sharp contrast to the manner in which the Mamak petty traders and salesmen had been living in for several generations, with little change in lifestyle.

I asked Zakaria why, given all his wealth, he chose to continue living in in the manner in which he did, instead of returning to Tamil Nadu. The answer received was almost identical to that given by Abdul Lathif Maraikar: the fear of boredom. I was surprised, and even suggested that if there was indeed this apprehension, why did Zakaria not consider moving to a town near his estate in Tamil Nadu, to indulge in business or to invest in urban property? To this he responded that he could not see himself doing any other business; he was too involved with that of secondhand books, suggesting some kind of passionate immersion, normally seen, perhaps, just in “dedicated” book addicts like me. Zakaria would not even consider investing his money in , for, after all, he held only the red identity card of non-citizens. Zakaria passed away in during one of his home visits which took place every two years or so, each allowing him several months with his family. His business was taken over by his son-in-law, his apprentice and assistant for several years.

’s Mamak booksellers are a dying breed, the number of stalls diminishing with the passing away of veteran dealers not succeeded by younger ones, and the lack of constant supplies to keep the trade going. Many of the older and larger collections, built up meticulously over years, even decades, have been sold off, usually tragically dispersed in countless parcels, the books trickling into the stalls. I remember, in particular, the impressive collection of the late D.R. Ramanathan, erstwhile mayor of , going off in this fashion. Some of his volumes, like those of other collectors with well-known or easily recognizable names, have found a place on my own shelves. Unlike in there is a notable absence of up-market secondhand bookshops in ; shops such as those, sterile and unexciting, that have, in recent decades, found a place in gleaming shopping complexes.

For older devotees of books the joy of discovering gems buried in heaps of junk will no longer be found in . The island’s younger readers will never know the pleasures that could come from spending, even occasionally, an hour or two of one’s leisure time in the famous but modest Mamak bookstalls that, having had their inception on Teck Soon Street, once thrived on Macalister Road.

Posted by Ione traveller at 8:53 PM No comments:

Ione traveller
I need not say too much. I am an academician and a writer. Occasionally, having no choice, I come to the verge of becoming a thinker. I consider lengthy biographies a waste of time. For further information, if there is a compulsion to do so, please go to my webpage: www.gsyousof.com 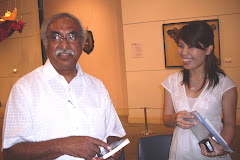